Looking for ways to immerse yourself in Jewish study and text? Women’s League for Conservative Judaism is excited to introduce a new program to enhance, enrich, and engage our Conservative Jewish Women in the 21st Century: Listen, Pray, Think: A Journey through Mishnah Berakhot, an 18-month study of the entire Tractate Masechet, of Mishnah Berakhot. This course will consist of ten live Zoom videoconferencing sessions taught by female scholars and rabbis, which will be recorded and posted on the Women’s League website. Materials will also be available on our WLCJ website prior to each session for individual study, b’chavruta study with a partner, or as a group study with your Sisterhood. Instructors will include Rabbi Amy Levin, Rabbi Gail Labovitz, Rabbi Cheryl Peretz, Rabbi Ellen S. Wolintz-Fields, and Rabbi Pamela Barmash.

Call-in information will be sent upon registering – Please refrain from joining the call until FIFTEEN MINUTES before the session. This program is open to REGISTERED individual Women’s League and sisterhood members ONLY. Not a member yet? Become an Individual Member here! Make sure to register for all individual sessions in order to take the full course.

No previous study will be needed to join the Zoom calls, just prior registration. Videos of each session are available for members as YouTube links under our Members Only section. For more information or questions, please contact Rabbi Ellen S. Wolintz-Fields at ewolintz-fields@wlcj.org.

Learn more about Mishnah Berakhot and the reasons why we chose it. Get the answers to the other FAQ about the program here!

Videos from Rabbi Amy Levin and Gail Labovitz’s sessions are now available on YouTube for our members! Log into the Members Only section of www.wlcj.org, and open the document in the Mishnah Berakhot folder for links. The document will be updated with each subsequent session video. 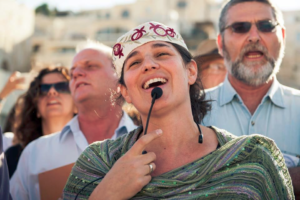 Rabbi Chaya Rowen Baker was ordained in 2007 by the Schechter Rabbinical Seminary in Jerusalem.  Born to an Orthodox father and a Reform mother, she grew up within the Masorti Movement in Israel. She holds a BA from the Hebrew University in Jewish History and Archaeology, and an MA from the Schechter Institute in Jewish Studies. Rabbi Rowen-Baker was the 2007 Tanenbaum Fellow of Congregation Beth-Tzedec in Toronto and a RIKMA fellow for leadership development. Since her ordination, Rabbi Rowen-Baker has been serving as the rabbi of Kehillat Ramot-Zion in French Hill, Jerusalem, a Masorti congregation home to many Israelis in search of a meaningful connection to Jewish tradition in a rapidly changing world. Much of Rabbi Rowen-Baker’s work is done outside the synagogue space, with those not accustomed to synagogue life, so as to make accessible a vibrant Jewish approach and practice which is part of all walks of life. In 2015, she was the first Masorti rabbi – and the first female rabbi – ever to be invited to teach Torah at the Israeli President’s residence. 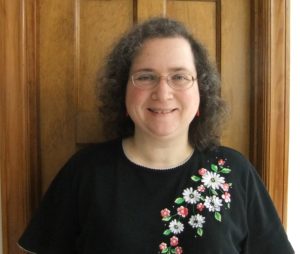 Rabbi Pamela Barmash, Ph.D., has served on the Committee on Jewish Law and Standards of the Rabbinical Assembly since 2003 and on the Joint Beit Din of the Conservative Movement since 2008. She is co-chair of the new Disabilities Inclusion Committee of the Rabbinical Assembly. She served as the rabbi at Temple Shaare Tefilah, Norwood, Massachusetts, for eight years, and she taught at the Conservative Yeshiva in Jerusalem for many summers. She received her B.A. from Yale, rabbinic ordination from the Jewish Theological Seminary, and Ph.D. from Harvard. Rabbi Barmash is professor of Hebrew Bible at Washington University in St. Louis and has served as director of Jewish, Islamic and Near Eastern Studies there. She has been a fellow at the Hebrew University, Jerusalem, and at the Institute for Advanced Study, Princeton. In her rabbinic writing, she wants to inspire more Jews to observe more mitzvot, and she is the author of teshuvot (rabbinic papers) on contemporary issues in Judaism. In her academic scholarship, she addresses issues of law and justice in her book Homicide in the Biblical World and shows how Jews have transformed the story of the Exodus and the celebration of Passover to meet changing needs and concerns in Exodus in the Jewish Experience: Echoes and Reverberations. 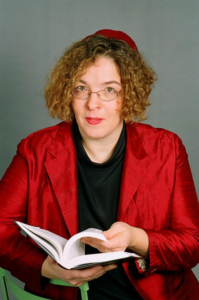 Gesa Ederberg’s status as the first woman rabbi to serve in Berlin since the Holocaust has helped her reinvigorate the German community that once represented the cutting edge of liberal Judaism. Born a Lutheran, Ederberg first visited Israel at age thirteen and slowly fell in love with Judaism. She studied religion in Germany and Israel before converting to Judaism at the Jewish Theological Seminary in New York in 1995. After returning to Berlin, she taught Hebrew school and organized an alternative minyan at the prestigious Oranienburger Strasse Synagogue, slowly taking on more of a leadership role in the community that has been the center of Berlin’s liberal Jewish community for 150 years. Ederberg then entered rabbinical school at the Schechter Institute of Jewish Studies in Jerusalem, earning her ordination in 2003, and in 2007, she returned to the Oranienburger Strasse Synagogue as their new rabbi. Working to create local networks for liberal rabbis, she was a founding member of the General Rabbinic Conference of the Central Council of Jews in Germany and, in 2006, she helped found the European Rabbinical Assembly of Masorti/Conservative Rabbis. As of 2016, she continues to serve as their executive vice president and treasurer. 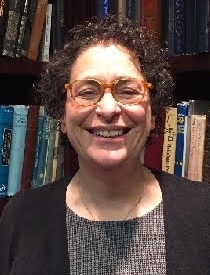 Rabbi Amy Levin, the second woman ordained by the Schechter Rabbinical Seminary of the Masorti Movement, has trained in the Rav Hamachshir program of The Jewish Theological Seminary and the “Consulting for Vital Congregations” program of The Alban Institute. She has served congregations in Israel and in the United States and is the past president of The Board of Rabbis of Greater Rhode Island. In that role she testified before the Rhode Island General Assembly supporting new legislation regarding same sex marriage, gun control, funding for domestic violence education and more. Rabbi Levin has served on the faculty of the Schechter Institute, Hebrew Union College and The Conservative Yeshiva. Since 2011, Rabbi Levin has served on the Committee on Jewish Law and Standards of the international Rabbinical Assembly. She returned to Israel in the summer of 2016 and lives on Kibbutz Hanaton. From there, she has established Tzibur Strategies for Vital Congregations and Their Leadership (www.tziburstrategies.net) providing consulting and coaching for congregations, clergy and leadership teams and Pirka Mobile Jewish Learning providing live-streaming, interactive Jewish learning through video chat platforms. She also serves as Kibbutz Hanaton’s Director of Community Life and Services. 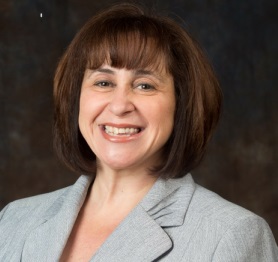 Since 2001, Rabbi Cheryl Peretz has served as one of the deans of the Ziegler School of Rabbinic Studies, teaching, counseling, advising and programming.  She is also a regular contributor to Today’s Torah, the School’s virtual Torah learning program.  In addition to her work at AJU, Rabbi Peretz has served as a pulpit rabbi in Los Angeles area synagogues such as Sinai Temple, Adat Shalom in West Los Angeles, and Burbank Temple Emanuel El.  She has been a High Holiday guest rabbi in Orlando, Florida and Redlands, California. Rabbi Peretz is a 1988 graduate of the double degree program between Barnard College and the Jewish Theological Seminary of America where she earned degrees in Mathematics and Jewish Philosophy.  While working on her MBA in Marketing, Rabbi Peretz also worked for United Synagogue of Conservative Judaism before embarking on a full-time career in marketing consulting for Fortune 500 companies.  During this time, she also volunteered as a teacher in a Hebrew high school, as a board member and committee member in her synagogue, and for the Federation’s Young Leadership Program. Rabbi Peretz has taught in a variety of synagogues, Havurah groups, schools and other frameworks. She also serves as scholar-in-residence for synagogues and organizations throughout North America.  She has published articles in several books and publications.

Read more about the instructors and download study materials from previous sessions: 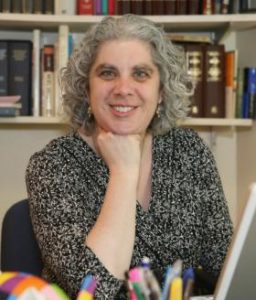 Rabbi Gail Labovitz is Professor of Rabbinic Literature and former Chair of the Department of Rabbinics for the Ziegler School of Rabbinic Studies. She was ordained as a Conservative rabbi in 1992, and earned her doctorate in Talmud and Rabbinics in 2002, both at the Jewish Theological Seminary of America in New York. Prior to joining the faculty at AJU and ZSRS in 2003, she taught at JTS and the Academy for Jewish Religion in New York, and served as the Senior Research Analyst in Judaism for the Feminist Sexual Ethics Project at Brandeis University, and as the Coordinator for the Jewish Women’s Research Group, a project of the Women’s Studies Program at JTS. She is the author of Marriage and Metaphor: Constructions of Gender in Rabbinic Literature, and numerous articles, chapters, and reviews; her volume on Tractate Mo’edQatan for the Feminist Commentary on the Babylonian Talmud is forthcoming. Her teaching specialties include rabbinic literature, Jewish law, and gender theory.

Rabbi Ellen S. Wolintz-Fields proudly serves as the first rabbi in the position of Executive Director of Women’s League for Conservative Judaism, a role she dreamed of holding – the ability to spearhead the organization which for 100 years has been engaging, enriching and empowering Conservative Jewish woman.  Previously Rabbi Wolintz-Fields was the Vice-President for Congregational Engagement at ITC, Israel Tour Connection, and for eighteen years, served as a congregational rabbi and educational director in communities in Toms River, New Jersey, Grayslake, Illinois and Long Grove, Illinois. The Brooklyn native is a graduate of the Double Degree Program at Barnard College and List College, and majored in Religion and Talmud.  She studied for nine years at the Jewish Theological Seminary, where she graduated from List College with a BA in Talmud, from the Graduate School with an MA in Jewish Women’s Studies and Rabbinic Ordination from the Rabbinical School. During her time in Rabbinical School she studied at Machon Schechter in Jerusalem. She has spent time studying at the Shalom Hartman Institute in Jerusalem, and during her years in the pulpit rabbinate was chosen as part of the STAR Rabbis: From Good to Great cohort.

Rabbi Wolintz-Fields is the co-chair of the Rabbinical Assembly’s Women’s Committee and serves on the RA Resolutions Committee, and the RA Committee on Jewish Law and Standards. She serves on the RA Executive Council and served as vice president of Chicago Region of the RA. As a rabbinical student, she was secretary to the Committee on Jewish Law and Standards. She has served as a board member of Caregiver Volunteers of Central NJ, the House of Hope in Ocean County, and has been a member of the the Greater Toms River Interfaith Clergy Association and SABRA, the Shore Area Board of Rabbis.  She has been invited to deliver Opening Prayers at the United States House of Representatives, the New Jersey Senate, the New Egypt Speedway, and the Ocean County College Commencement. She and her husband Jonathan are the proud parents of three children and a Golden Retriever, and live in Ocean Township, New Jersey.